Pop culture and the Pier 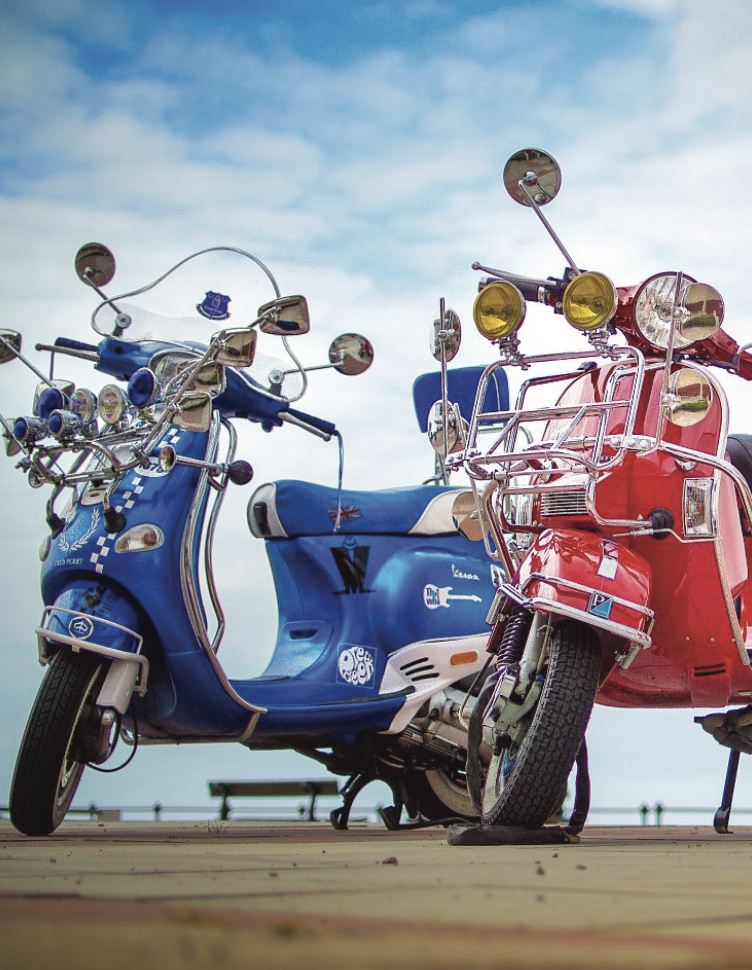 Since the Gala Opening in 1869, Clevedon Pier has been enjoyed by visitors of all ages. In the first half of the 20th century, it was particularly popular with boat trippers. To attract additional visitors to the pier a dancehall was added to the pierhead in 1913. However, visitor numbers continued to fall. But all this was to change in the 1950s with the arrival of rock’n’roll in the West Country.

Piermaster Bernard Faraway installed the first jukebox in 1957 and the impact was electrifying. Overnight the Pier was transformed into a pleasure palace for young people – not just from Clevedon but also from elsewhere including Weston-super-Mare. The Pier has remained important for those interested in popular culture. In more recent years it has featured in Hollywood blockbusters like ‘Never Let Me Go’ major TV series like ‘Coast’, ‘River Monsters’ and ‘Thirteen’ and the One Direction music video You and I’.

In 1945 there were fewer that 100 jukeboxes in Britain – by 1958 there were roughly 13,000. Scattered about British fairgrounds, coffee bars and cafes and also installed at the end of the pier, jukeboxes offered access to current popular music not played on BBC radio. Most importantly, jukeboxes played rock ‘n’ roll. Early British jukeboxes were small, cheap imitations of their American cousins that appeared to have been styled on the household fridge. The first jukebox on Clevedon Pier was probably of this type with no more than twenty records. But after an argument one night when the jukebox is rumoured to have been thrown into the sea, a BEL-AMi 200 – in gleaming silver, pink and Charcoal and containing 200 hit records – was installed.

Across Britain and America. the jukebox was soon seen as a powerful symbol of juvenile delinquency, largely because it encouraged youngsters to hang around, apparently doing nothing. But the jukebox helped transform British popular music into a youth-oriented market based on teen idols and hit singles that still exists today. 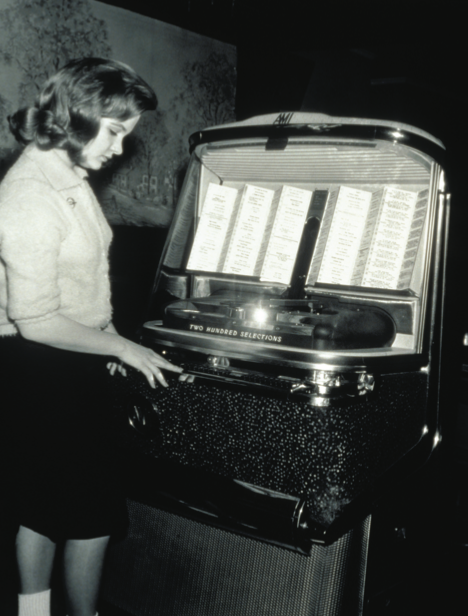 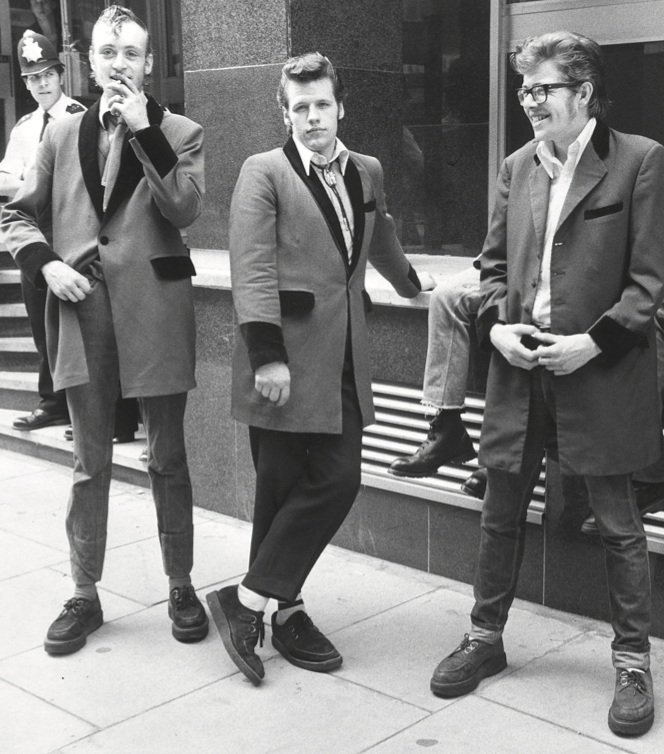 The Teddy Boys, or Teds as they became known, were probably the most striking feature of British post-war youth culture. The Teds’ distinct clothing and hair style made them stand out. They had a reputation for getting into fights over territory and music.

The new, American sound of rock’n’roll helped establish the Teddy Boy look. For boys, the typical outfit would be a drape jacket, usually worn in dark colours and sometimes with a velvet trim collar and pocket flaps. Trousers wore ‘drainpipes’, worn with crepe soled shoes. The look would be finished off with a bootlace tie. Teds also adopted the DA haircut, a symbol of rebellion, made popular by Elvis Presley.

Girls, who had less disposable income than boys in the 1950s petticoats, paired with either back-to-front cardigans, tight polo necks, scoop neck blouses or three-quarter sleeve fitted shirts. A scarf, knotted in a cowboy-fashion way, at the side of the neck completed the look.

“That pier was just rock ‘n’roll”

The association between Teds and territorial fights was not entirely misplaced: Clevedon’s Teddy Boys in the late 1950s and early 1960s had a long-running dispute with the Weston Boys’ who travelled up by train from Weston-super-Mare. At the time. however. Clevedon could muster ten policemen to contain any potential trouble.

“My memories of the pier are the rock’n’roll years with the jukebox. We used to just live on there. Every evening we would go down!”

Originating in London but quickly copied across the country, coffee bars were free from licensing laws and the influence of school and the Church. Early coffee bars copied the American bars by hosting live music performances, especially the short-lived but energetic sound of skiffle. But the introduction

of coffee machines and jukeboxes playing the even more potent beat of rock’n’roll provided Britain’s teenagers with their own space to meet, talk, preen and dance the night away. Both in London coffee bars as well as in ‘Fortes’ coffee bar in Clevedon, the teenage soundtrack became one of

steaming, frothing coffee machines, the clink of Coca-Cola bottles, the noise of pinball machines and the jingle of sixpenny pieces dropping into the jukebox.

For many the heady sound of rock’n’roll was also the background accompaniment to the first flushes of teenage love and all its special frustrations. This was also the topic of many of the times’ hit records such as The Everly Brothers’ 1957 hit, ‘Wake up Little Susie’ (a song banned on some radio stations in USA, for its ‘suggestive’ lyrics), or The Kinks 1964 ‘All Day and All of the Night’. 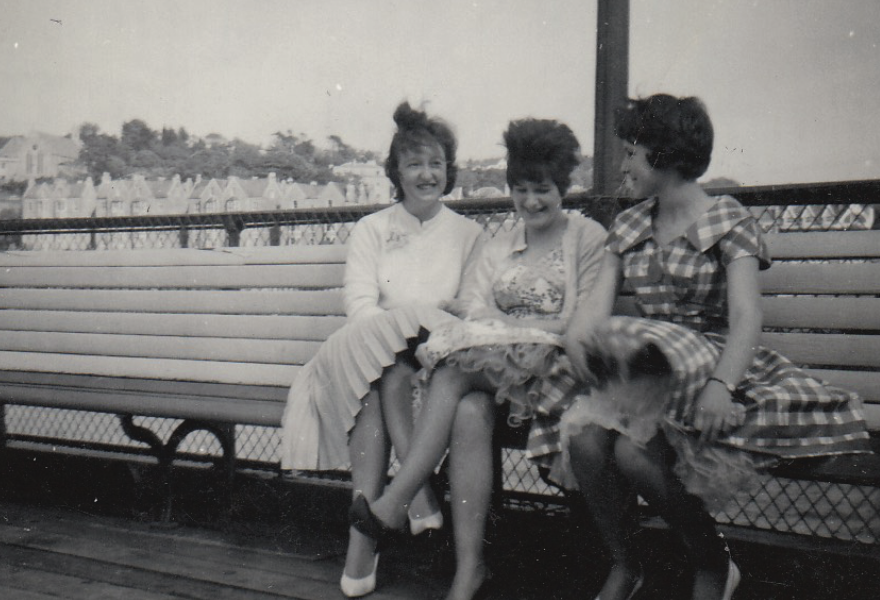 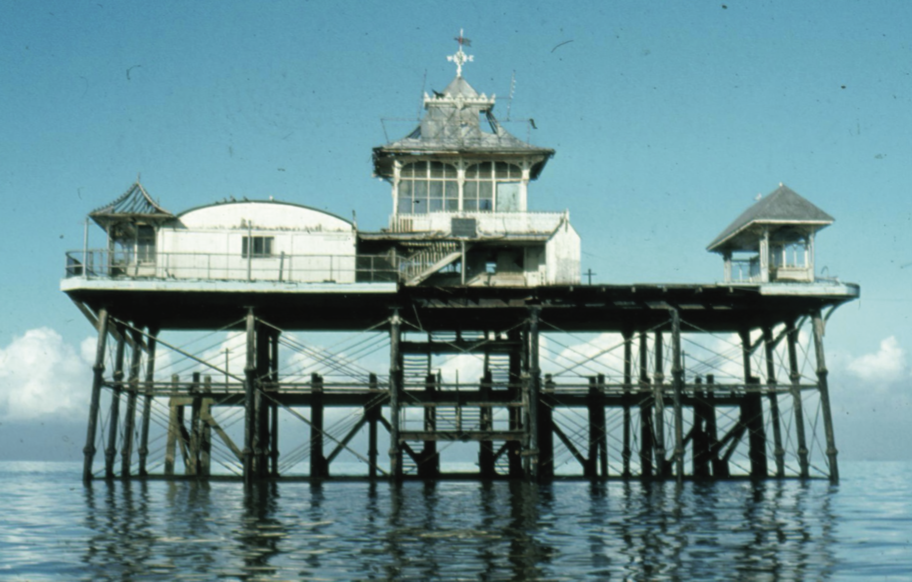 Dancing on the Pier

As the 1950s began, more than 5 million people were passing through the turnstiles of Britain’s piers, and as the decade continued, full employment, cheap fares on the railways and freedom from the restrictions of wartime rationing saw the pleasure pier reach its height of popularity. Always an odd mix of the refined Victorian elegance of their design and the slight vulgarity of kiss-me-quick hats, slot machines and sticky rock, many piers also provided a home for music.

From their Victorian beginnings as a fashionable promenade over the sea, to the introduction of brass bands, pierrots and music hall and variety, the pleasure piers steadily grew in popularity. Throughout the 1930s and 1940s, big bands and ballroom dancing filled many pierhead theatres, in the 1950s jukeboxes belting out rock’n’roll took their place, just as the beat groups in the 1960s and the glam rock and punk shows in the 1970s later replaced them, too.

Clevedon’s pierhead hall was a dance venue as early as the 1930s. But it was the introduction of jukeboxes, coke machines and the emergence of music obsessed ‘teenagers’ that transformed the Pier in the late 1950s and early 1960s into the most exciting venue for the town’s youth. People also recollect Welsh boys catching the steamers over to Clevedon on Sundays to have a drink – because up until 1996 Wales was dry’ on Sundays – and meet local girls. But

when the signal sounded for imminent boat departures, they had to bid a quick goodbye to their Somerset sweethearts.

“I think about 1958. we heard there was this wonderful thing at the end of the pier called the jukebox.”

Memories of the Pier

In the Pier’s Visitor Centre, you can listen to some of the podcast interviews that were recorded as part of the People’s Pier Oral History Project. We would like to thank everybody who contributed to the archive by recording their memories of fun times on the Pier, and in particular: Jenny and Derek Cony.

The Clevedon Pier and Heritage Trust is keen to collect more stories, memories and information about life on the pier so if you would like to contribute to the oral history archive, please do get in touch using the contact details below.

Who are the people behind the project?

The People’s Pier research project investigates how British seaside piers’ popular culture heritage can be utilised to build positive relationships across different groups and empower the community. The project is led by the University of Brighton in collaboration with the Clevedon Pier and Heritage Trust and other university partners and pier organisations. It is funded by The Arts and Humanities Research Council.