Pier Gates to be restored to their former glory!

This week, the Pier gates will be temporarily removed for refurbishment. With the support of our main sponsors, The Hawthorns and Poets Mews, the gates will be restored to their former glory ready for our Queen’s Platinum Jubilee celebration on Sunday, 5th June. The work is part of the six figure sum that the Trust will be spending on essential maintenance this year, and follows on from the purchase of 120 new deck planks. The picture above shows the gates dressed by the Clevedon Flower Arranging Club for the Pier’s 150th anniversary celebration.

The current gates were put in place in 1998 as part of the restoration work undertaken after the catastrophic collapse of two spans in 1970. The gates were donated by The Hawthorns which at that time was one of 120 hotels owned by the giant Holiday Retirement Corporation of Oregon.

Over the years The Hawthorns, and more recently Poets Mews, have been valued partners and their residents are amongst our most frequent visitors and loyal supporters. Once again, for 2022, The Hawthorns are the Trust’s main sponsor and with their help we are now able to return the gates to their original condition.

Back in 1994, Bill Colson, the President of the U.S. Company which was building The Hawthorns at the time, said: we plan a close working relationship with the Pier once the hotel, which will cater largely for the elderly, is completed. It is gratifying that despite a change in ownership our partnership with The Hawthorns has gone from strength to strength.

The original gates, likely the design work of Hans Price, were installed in January 1869 ready for the official opening of the Pier three months later. The Bristol Mercury described them as neat and substantial entrance gates of iron flanked with Norton’s patent turnstiles for the admittance of visitors. They consisted of four barley-twist cast-iron columns which carried gas lamps with supporting stays. These can be seen in the picture above, taken during the 1897 Jubilee – capturing Captain John Gower Rowles (with beard) by the tollhouse. Although the turnstiles no longer feature, the current work will open up a second entry point on the right-hand side of the gates, allowing easier entry and exit in busy times. 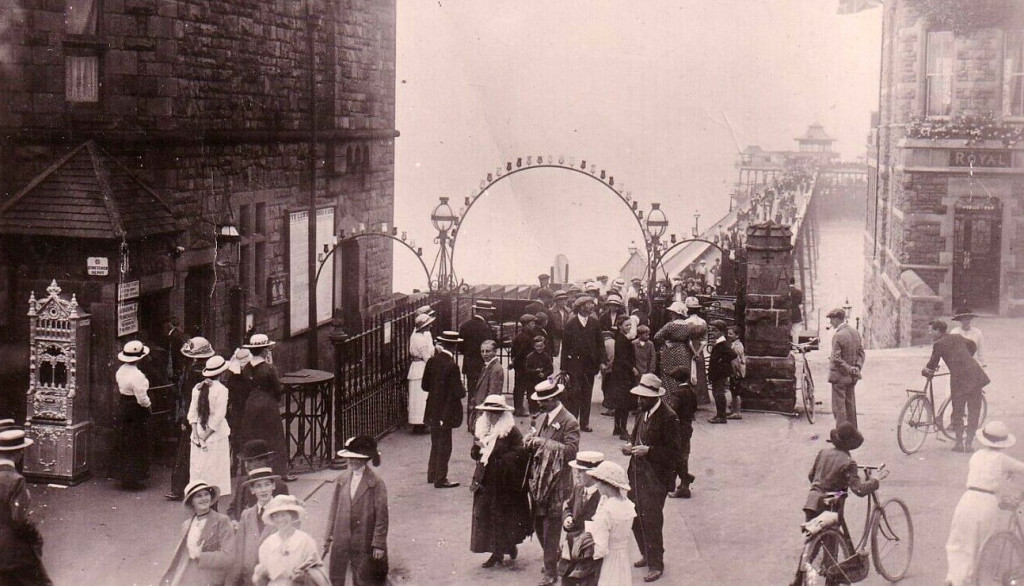 Early in the 20th Century the original gates were augmented by arched additions which can be seen in the picture above. In the 1990s a decision was made to reduce these so as to reinstate the original historic profile. There was much debate about what gates should replace those that were allowed to detiorate after the 1970 collapse but the chosen design has proved to be a perfect entry point to the UK’s only Grade 1 listed pier and it is fitting that they should be returned to their full splendour in time for the Jubilee.

If you would like to support this project, or indeed help us to maintain Clevedon’s beautiful pier, then you can make a donation here.

With thanks to our Clevedon Community Archive team and – in particular – Jane Lilly, for the images and information.