Our landing stages – what the drone survey has revealed

Much of what the engineers do to maintain our beautiful pier is visible: painting and repairing the promenade or replacing deck planks. However, the recent drone survey brought fresh images of parts of the landing stage that are hidden in all but the lowest spring tides each year. We thought it would be interesting to describe the strengthening and repair of this 1913 structure – one of the first to be built with the new technique of Hennebique reinforced concrete – before looking ahead to the future. 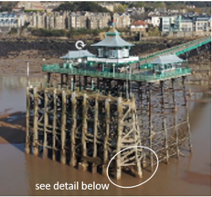 The structure has 22 legs, braced apart for strength, and a series of landings to allow ships’ passengers to board at all states of tide. Timber fenders on the seaward legs absorb some, but not all, of the impacts from the ships.

Back in 1995, our engineers noticed that every leg was cracked horizontally below the lowest ring beam. A diving team discovered further cracks near the seabed. Cracks of up to 40mm (around 1.5 inches) were recorded on the seaward legs, caused by repeated ship impacts over many years. The landing stage was clearly in a parlous state and major repairs were required to ensure that it could continue to operate safely.

Our engineers worked with the divers to develop repairs that could be installed underwater in the zero-visibility waters of the Severn Estuary. We encased the lowest level of each leg in a reinforced concrete jacket to encapsulate the fractures and installed additional diagonal bracing in the bottom bay where previously there was none. Impact loads from ships would thus be taken down the diagonal bracing to the seabed. The key features are shown in the drone photograph below (see if you can spot the drone!) 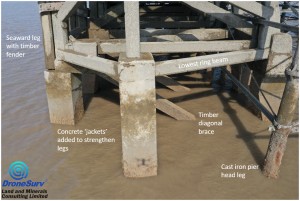 Two fundamental features of this design allowed it to succeed. Firstly, concrete is heavy, so could be poured underwater into moulds for the jackets, displacing the seawater upwards. Concrete also sets whilst submerged. This is a normal construction technique. In contrast, we chose to use greenheart timber within the concrete frame for the diagonal braces because it is relatively light when submerged. A timber brace weighing a ton on land becomes almost weightless in water, so two divers could manoeuvre it easily, when compared to a precast concrete alternative. In addition, greenheart is abrasion resistant and lasts many years when saturated. It’s good to see clearly from the drone photographs that 25 years later the low-level repairs are still firmly in place.

Further up the structure, extensive repairs were also undertaken in 1997 to the beams and columns. Repairs included applying sprayed concrete onto the structure through a hose and nozzle to rebuild areas that had been worn away by the tides over the previous 80 years, or damaged through reinforcement corrosion.

The drone survey has now revealed that whilst many of these repairs are still intact, new areas of damage have occurred over the last 20 years, as shown in the adjacent image. Whilst not of immediate concern due to the other braces in the vicinity, this clearly needs attention in the near future. 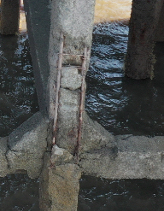 In many ways, this one image illustrates the ongoing task faced by the Trust. With limited resources, we will never be in the position where every bit of maintenance can be done immediately. We use the skill and experience of our engineers to prioritise repairs, so that the funding we receive from visitors and donors is used to maximum effect each year. It’s a frustrating reality that the cost of access over the water is often as great as the cost of the repair materials.

Through our engineers, we will continue to use our resources wisely, re-appraising repair schedules and specifying works to as high a standard as we can afford in order to safeguard this modest but critical part of the pier for many years to come.

If you would like to be part of the Clevedon Pier story you can buy a deck plaque or subscribe for an annual pass by clicking here. Thank you for your support.