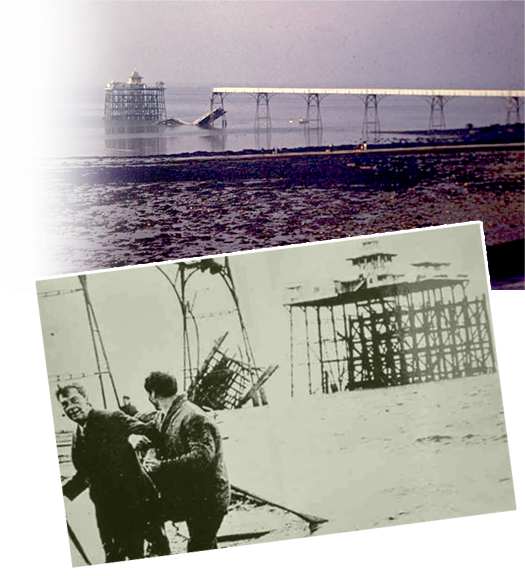 The new landing stage was a timely addition as the inter war years saw continued interest in excursions from the Pier on board the ships of P & A Campbells’ White Funnel Fleet. On a typical summer day in 1930 as many as five departures were recorded. A round trip covering Weston, Barry, Lynmouth and Ilfracombe was a popular excursion. Similar trips taking in Cardiff and Penarth catered for Welsh travellers. There were also channel cruises and short trips to Portishead and Bristol.

However, there remained an urgent need to attract additional visitors to the Pier and it is for this reason that a covered dancehall was added to the pierhead around about the time that the new landing stage was built in 1913. The new facility failed to arrest a decline in visitor numbers though and by 1956 the annual footfall had fallen to 45,000. 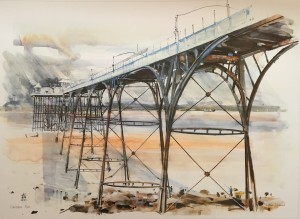 All this was to change just a year later with the arrival of rock and roll in the West Country. Bernard Faraway who had been appointed piermaster in 1949 suggested to the local Council that a juke box should be installed. The impact was electrifying. Overnight the Pier was transformed into a pleasure palace for young people – not just from Clevedon but also from elsewhere including Weston Super Mare. For many local teenagers in the late 1950s and early 1960s, the first time they heard artists like Elvis Presley, Pat Boone and Perry Como was during adrenalin charged nights of dancing on the Pier.

The annual visitor figure for 1959 was 83,000 and for a brief few years the Pier did cover its day-to-day costs.Sadly, by the end of the 1968 season the appeal of the jukebox was beginning to wear off and a decline in visitor numbers contributed to a £3,000 operating loss. In retrospect it is clearly the case that these financial difficulties resulted in inadequate provision for repairs and repainting. Emergency measures such as the addition of a support trestle to support a failing first span in 1948 had not been enough to stop the long-term decline.

Disaster struck Clevedon Pier at 10:20 on the morning of Friday, 16th October 1970, when under load testing for insurance purposes, the two end spans failed and collapsed into the sea.

Bernard Faraway recalls a day which is etched into the memory of many local people:

“After the steamer season had finished, the biennial test for insurance purposes took place. The method was to fill heavy duty plastic containers with water. These were 50ft long, 5ft wide and 2ft deep, filled to a depth of 10 inches. This gave a pressure equal to 50lbs per square foot. Eighteen containers were used, six for each span, and three spans were tested at a time, starting from the Toll House end of the pier. Each test lasted three hours and after the first test No. 1 span had passed. The six bags used on no. 1 span were emptied, dragged over the full bags to No. 4 span and then refilled. After a further three hours, No. 2 span had passed, and so on. No. 7 span collapsed (bringing down No. 8 also). The tests had been carried out under full supervision. The cause of the collapse was undoubtedly a weakness in the seventh span.” 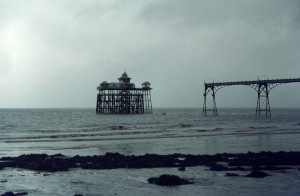 “I was working at the Walton Hotel when my mate said ‘There’s a big hole in the Pier”. I didn’t believe it at first but then I looked and saw that two spans were missing. I ran down to the beach – saw the damage and noticed detached four-inch hose trickling water into the sea. Apparently the three men doing the testing took a tea break at 10:00. They’d switched the water supply off at the hydrant but had not closed the gate completely. I reckon the additional flow was too much for the Pier to take.”

The collapse of Clevedon Pier made headline news, not just locally but nationally as well.

In the subsequent months, it became evident to local people that the Pier would not be repaired without a concerted effort to make things happen. Both the Pier Preservation Trust and the Pier Supporters Club were formed in 1972. Meanwhile the pierhead (now an island) continued to deteriorate. Its’ only visitors were seagulls and local council official Roy Lovelock who would visit the structure periodically in order to reset the tidal measurement equipment still in situ on the decaying landing stage.

Meanwhile the owners, Clevedon Urban District Council, were becoming increasingly concerned that the structure posed a danger to shipping. It was clear that there was a growing appetite to demolish what was left of the Pier rather than waste time on the seemingly hopeless task of restoring it. 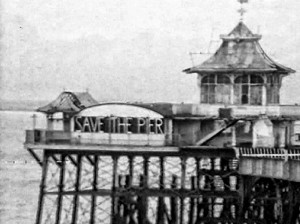 As political pressure began to mount, so did the determination of many local people who wanted to see the Pier saved. Foremost amongst this group were Mike Hedger, Peter Cowley and Tom Foden. A year after the initial collapse Mike used his boat to get access to the pierhead at high tide. He and Peter erected a 3ft by 18ft hardboard banner on the gable end of the derelict dancehall whilst Tom kept watch on the foreshore. The banner had been prepared in 3 sections in Mike’s garage and transported to the seafront in his car. Some 26 years later, at the reopening of the Pier in 1998, Sir Charles Elton identified this moment as the point when the public mood swung towards restoration of the Pier.

The efforts of Tom, Mike and Peter along with active championing by the Trust and the Supporters Club failed to convince Woodspring District Council to commit funds towards a restoration and in the summer of 1979 the Council voted to demolish the Pier.

The decision caused consternation and a Public Inquiry was called in March 1980 the Preservation Trust engaged Paul Chadd, Q.C., a Bristol barrister, to present the Trust’s case.

Paul adopted a ‘hearts and minds’ line of attack. Firstly he presented the large number of depositions received in favour of saving the beautiful and historic structure. One of these was voiced by the then Poet Laureate, Sir John Betjeman. In a recorded message Sir John spoke of “Clevedon being the most beautiful pier in England” He said that demolition would be a tragedy” and that “Clevedon without its’ Pier would be like a diamond with a flaw”.

Secondly Paul Chadd presented the results of an earlier feasibility study completed before the Inquiry. Funded by the Pier Preservation Trust, under pressure from Mike Allman (latterly Chairman of the Trust but at this point a new Trustee), Keith Mallory (architect) and Richard Fenton (engineer), this showed how the pier could be restored, with proper costings. Known as the Pier Technical Group, this small body supplied extensive supporting documentation to the Inquiry.

The arguments held sway and supporters of the pier were jubilant when judgment was given in their favour. The Technical Group formed a new Trust which was joined by Lady Elton, Mike Hedger and John Topham. This was to be a turning point in the history of Clevedon Pier. Along with the highly active Clevedon Pier Supporter’s Club lead by personalities such as Alan and Hilary Tinkling, Hilda Baker, Austin and Margaret Davis, and Ralph and Irene Fryer the vast majority of townsfolk in Clevedon were overjoyed that the Pier would be saved.

Next: The Pier comes back to life