The building of the Pier

Part 1 The building of the Pier

The building of Britain’s seaside piers was a direct legacy of the industrial revolution. The fruits of that revolution, often harshly exacted and only slowly shared, were wealth, leisure and new demands for entertainment and travel.

Until the Severn Tunnel was opened in 1886, Brunel’s Great Western railway line from London to South Wales took the ‘Great Way Round’ (via Swindon and Gloucester) – Clevedon’s closeness to the main line from London to Bristol and the South-West, and the opening of the branch line to Clevedon from Yatton in 1847 offered the exciting possibility of a faster route to South Wales by steamer from a pier at Clevedon. Such a scheme would supplement the existing route between New Passage and Portskewett which had been operating further upstream since 1863.

A pier for Clevedon had been under consideration for some time. Indeed a partly constructed structure had been destroyed by high winds and heavy seas in November 1837. However the idea was revived and on a Wednesday in November 1866, a meeting took place at the Public Hall, Clevedon. A proposed scheme for a pier was accepted and The Clevedon Pier Company was formed, the board of directors made up of Sir Arthur Elton, Richard Godwin, Samuel Ransford and John Maynard. By July 1867 work had begun.

The first physical sign of the pier was a buoy bobbing 800 feet out into the channel. It had been placed there by Mr James Bullock, a resident mariner, under instructions from Mr Charles Lempriere, Shairman oif the Aberystwyth and Tynmouth Pier Company. On the basis of this survey it was suggested that Clevedon’s pier should be 840 feet long.

The actual construction work was entrusted to Hamilton’s Windsor Iron Works of Liverpool. Two engineers, John William Grover and Richard Ward were engaged. They opted for an openwork structure, providing minimum resistance to the wind and waves. A marriage of beauty, utility and economy.

The contractors had been lucky to find some large quantities of Barlow rail, discarded from Brunel’s broad-gauge South Wales Railway. It may not have been successful as railway line, but it could be used to make superbly slender and strong supports for the pier. For almost two years, slowly diminishing stacks of the ironwork were stored along The Beach, Esplanade and Wellington Terrace. The construction of the pier was a very laborious task as every section of ironwork had to be manhandled before the crane could raise it into position. Approximately 370 tons of wrought ironwork was required. Gales regularly halted the work, but the structure held firm.

The construction was at times a perilous undertaking. Anthony Sheridan, one of the riveters, is recorded as having saved three men from drowning. Henry Groves was not so lucky. He was killed whilst hoisting a small boat under the Pier. The mercury reported that a gloom was cast over the entire works ‘in consequence of this melancholy occurrence’.

Construction of the abutments to the Pier was not as hazardous as that of the pier itself. However, the design had changed from its original form and now included a Toll House, with accommodation for the Pier Master, which was built by Clevedon builder, W. Green, who was also responsible for building the bandstand further along the beach. It was designed by architect Hans Price of Weston-Super-Mare, in a Scottish baronial style, much favoured at that time for bridge abutments. The romanticism of its design, contrasted strongly with the functional engineering of the pier. The entrance gates and railings were made in Clevedon in the foundry of Turner and Sons.

In all, the total cost of building the pier was £10,000 and employed an average workforce of sixty men. On the 6th February 1869, the contractors were able to hand the completed structure over to the Directors of the Pier Company. 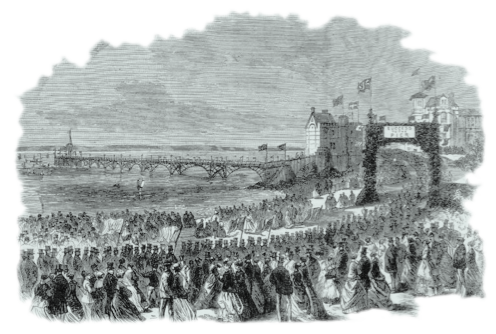 The official opening of Clevedon pier was held on Easter Monday, 29th March 1869. Throughout the morning, large numbers had congregated at Clevedon railway station. The 10:15 train from Bristol alone had brought five hundred passengers.

The opening day was a great success according to at least one contemporary newspaper report. Floral arches were erected throughout the town and a salute of guns was fired when the flag by the tollhouse was hoisted. Four hundred people were treated to lunch and the Board of Directors dined together at the Rock House Hotel.

Echoing the profound wishes of this great concourse, a huge triumphal arch astride the Marine Parade, carried the inscription, ‘SUCCESS TO THE PIER’.

At 1.30pm the five hundred children burst into the singing of Psalm 148, and there was a short service of dedication, in which the local clergy also hinted that the opening of the pier should not be allowed to interfere with the observance of the Sabbath. There was then a cannon volley fired by the First Somerset Artillery, the massed bands played the National Anthem, and Clevedon pier was open for the good of the townspeople and the benefits which commerce would bring.

Victorian era and beyond

For twenty years Clevedon pier provided a new, fast route over to South Wales. However, the opening of the Severn Railway Tunnel on 1st December 1886 began to snatch away the passengers that might have travelled to Clevedon for the transfer via the steamers. Business on the pier faltered and in 1891 the pier was transferred to the ownership of Clevedon Council, just at a time when costly pierhead improvements had become essential.

However, it was not all doom and gloom. The sum of £10,000 was borrowed from the town, to pay for a new pierhead and a landing stage. These consisted of twenty-four massive iron columns and forty-two green-heat piles, 25 feet long. The new landing stage was built at an angle to the pierhead, in order to align with the prevailing Bristol Channel current. The re- habilitated pier was re-opened on 3rd April 1893 by Lady Elton.

Just a year later, a Japanese style pagoda and two shelters were added to the pierhead. The style of these beautiful structures owes much to John Nash’s Brighton Pavilion built several centuries earlier. The Town Surveyor oversaw this work which was undertaken by McDowell and Stevens of the Melton Iron Works. 26 tons of ironwork was thus added to the pierhead.

In 1913, the timber landing stage, which had deteriorated, was replaced by the present pre-cast concrete structure. Even this work suffered temporary disruption by a gale which wrecked sections of the newly installed concrete and ripped up decking.

Next: Decadence, decay and collapse