It is with great sadness that the Trust must acknowledge the passing of Anita Sims who died on the 27th December 2016 following a long period of ill health. Anita was a Trustee for eight years and throughout her tenure was committed, influential and highly respected. Her colleagues will remember Anita for her championing of all matters relating to boats and ships and for her expertise in the preservation of heritage buildings.

Prior to her involvement with the Trust, Anita worked as a conservation architect for forty years – initially for a large practice in London and latterly in the West Country where she filled a number of senior roles including Principal Conservation Officer for North Somerset District Council. Anita had a life long commitment to voluntary community service as well. Aside from her work at Clevedon Pier, Anita was a fully accredited Blue Badge Guide and was active in a wide range of local and national charitable organisations including The Paddle Steamer Preservation Society.

“Anita was incredibly proud to be a Trustee and I’m personally indebted to her for the unwavering support she has provided over the years. Even after she became very ill, Anita was a key contributor to the heritage work we have completed as part of the new visitor centre development” (Simon Talbot-Ponsonby, Chairman of the Clevedon Pier and Heritage Trust).

Anita died aged 83 years and is survived by her husband of 58 years, Ron. Ron shares Anita’s passion for The Waverley and The Balmoral and we wish him and the rest of their family well for the future.

The picture above shows the Waverley leaving Clevedon Pier last summer when we were proud to host this lovely paddle steamer for a weekend. 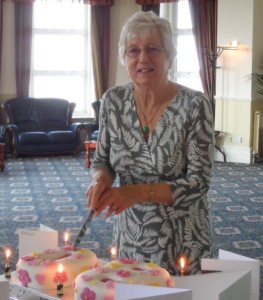